Of the 63 elephants taken from their herd and homeland in 1984, only about 20 still survive in 2016. At least 10 died while still at JumboLair, about 40 were transferred to zoos and circuses; the remainder have been lost to time. Save Nosey NOW! pays tribute to the survivors … here are some of their stories. 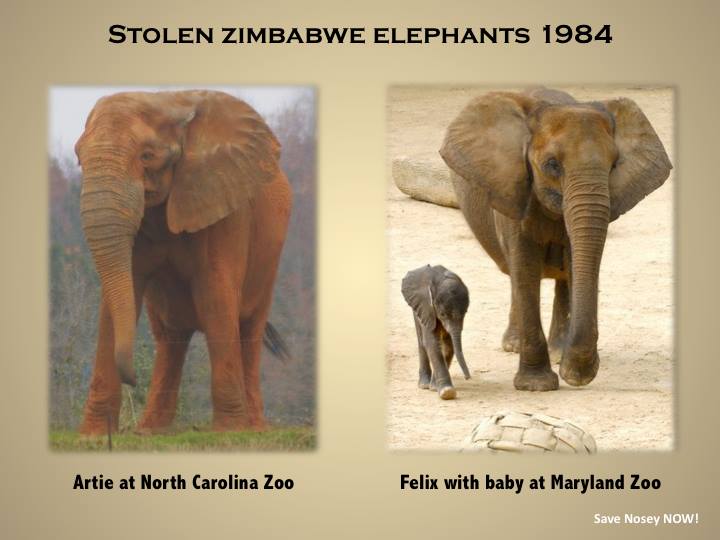 TIMBA (aka Star) has resided at the Montgomery Zoo (Alabama) since 2004. Previously, she lived at Octagon, a pseudo-sanctuary in Florida, at Hollywild Animal Park, owned by the man who took on the job of dispersing the JumboLair herd, and at Riverbanks zoo in Columbia, South Carolina. Timba was impregnated in 2009, but her calf was stillborn, a fate shared by many captive-bred elephants.

GINA was born in 1983 and has been at the Overton Park Zoo in Memphis, Tennessee since 2008. She spent 5 years with the George Carden Circus and 16 years with the Frisco Petting Zoo (Wonderful World of Elephants) in Peoria, Illinois. Gina had one stillborn baby in 2012, when she was 29, well over the recommended age for a first-time mother (24 years).

JOYCE has had a long and miserable life as a performing elephant, with the George Carden and Frisco circuses and 3 different entertainment parks. In 2009, she was loaned to the Brookfield Zoo, Chicago, Illinois, as a companion to its lone elephant, Christy, but after Christy died later that year, she was returned to her owners Six Flags Great Adventure & Safari, Jackson, New Jersey. 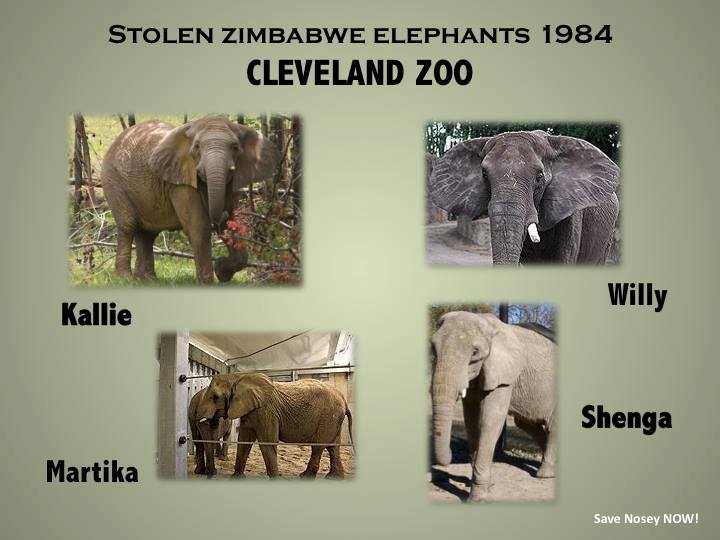 Two are together at Hemmingford Parc Safari near Montreal, Quebec, Canada:

Junot and Carole have spent their lives in the same locations, but not really together and never in an appropriate climate. They were first transferred to the privately-owned Bowmanville Zoo in Ontario, Canada, which bills itself as “one of the largest suppliers of animals to Hollywood movie and television programs.” In 1988, they were acquired by Zoo Sauvage de St-Felicien in Quebec. In 1993, that zoo made the right decision to close its exotic animal exhibits. Unfortunately, Junot and Carole were transferred to the Parc Safari–which at the time was in the midst of a massive “purge” of animals due to a TB outbreak. Two decades later, they remain together, but alone in their small habitat, without the company of other elephants. Due to the harsh winter weather, they spend much of their time in the barn. 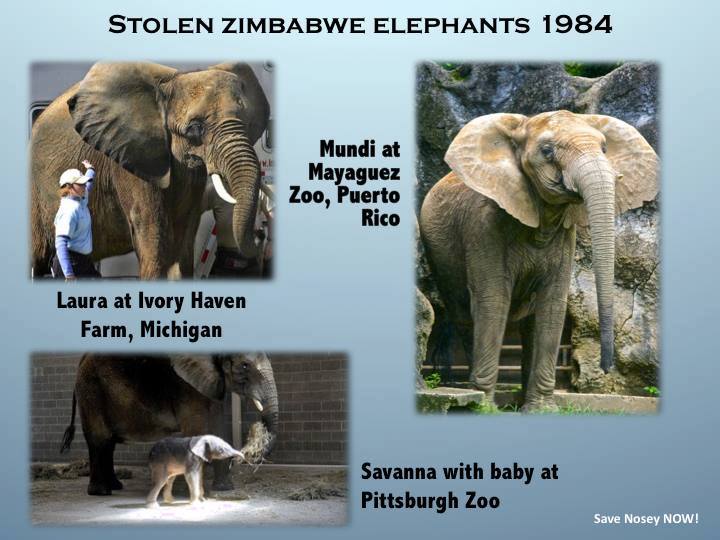 BETTE has spent her post-JumboLair life in the state of Pennsylvania, first at Secret Safari/T&T Camel Rides and then the Philadelphia Zoo. She currently lives at Pittsburgh Zoo’s International Conservation Center with 4 other elephants. The Center is a breeding facility. Elephants here are also forced to paint and do other tricks for the paying public.

GYPSY was “worked” by a private buyer until 2009, when she was transferred to the Dallas Zoo in Texas. The zoo says she “is retired from circus and movie life and enjoys watermelon. She loves attention and learning new things.” She has been on display with 3 other females for several years, but 5 Swaziland elephants were just delivered to the zoo in 2016. Their “display” has increased, as well as the revenues for the zoo.

Two have spent their lives together:
CHANA (aka Msichana)
MOKI (aka Mokala)

Chana and Moki spent 20 years at the Lee Richardson Zoo in Kansas, and another decade at Jacksonville Zoo in Florida. They were transferred together to Seneca Park Zoo in Rochester, New York, in 2015. Chana died in October, 2019. Moki remains on display with 2 other African elephants in a newer exhibit called “A Step Into Africa.” Due to the cold winter climate, they spend most of their time indoors; they will likely die well before their time from arthritis and foot ailments due to a lack of exercise. 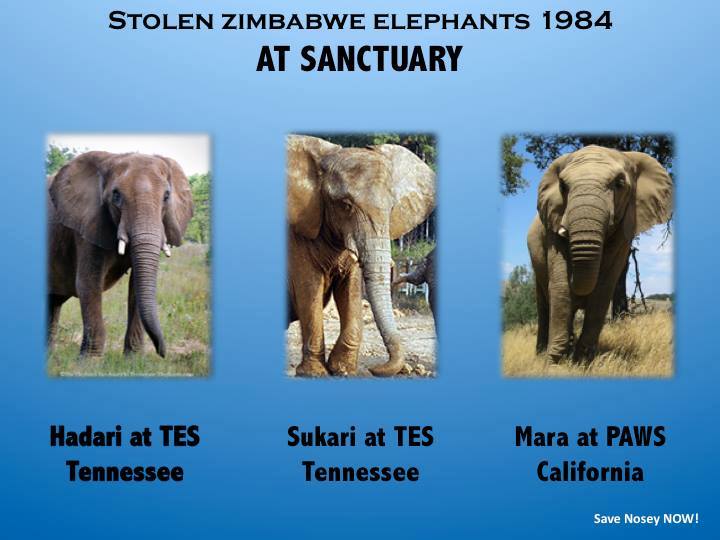 ARTIE (aka Aardvark), one of the few surviving males, was “worked” by a circus trainer for 10 years and then transferred to Riddle’s Elephant and Wildlife Sanctuary, in Arkansas. (This facility breeds elephants and allows public interaction so is more of an animal park than a “true” sanctuary.) In 2007, Artie was transferred to the North Carolina Zoo, Asheboro, where he still does “tricks” for treats.

FELIX (aka Lil Felix) spent a decade performing with the Bentley Bros. Circus and another decade at Riddles. She has given birth to at least two calves, Max who she had to leave behind at Riddles, and Samson at the Maryland Zoo, Baltimore, where she currently resides. 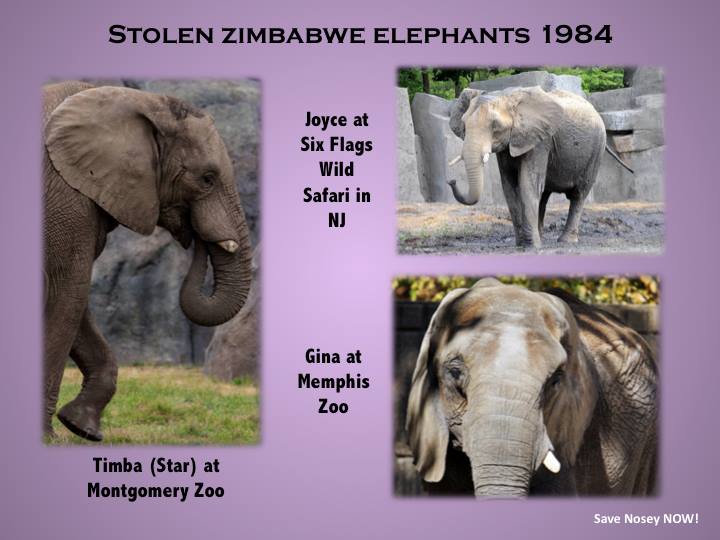 Four are together at the Cleveland Zoo, Cleveland, Ohio:

KALLIE (aka June) has been moved at least 4 times since being brought to the US with Nosey. She spent several years with Willy in a waterpark in Michigan and then in a series of traveling animal attractions, before being transferred to the Pittsburgh Zoo’s International Conservation Center. She was moved to Cleveland in 2011.

WILLY is a few years older than Nosey and was possibly transferred to the US before Arthur Jones’ rescue mission. He left JumboLair with Kallie, and after they were separated, spent several years at Disney’s Animal Kingdom near Orlando, Florida, before being brought to Cleveland in 2011. As the only male elephant at the zoo, he spends most of his time alone.

MARTIKA (aka Tika, Kiah) has been moved even more often than Kallie, going in and out of private ownership and zoos–from Florida to Pennsylvania–all of her life. She has been in Cleveland since 1997 … except for the 2 years she was moved to Columbus Zoo. No rest for a captive elephant!

SHENGA spent 5 years with David Meeks at Hollywild Animal Park, and then a decade at the Henry Doorly Zoo in Omaha, Nebraska. She was moved to Cleveland when her exhibit mate died. Ironically, the Henry Doorly Zoo recently acquired several more African elephants stolen from their families in Swaziland. 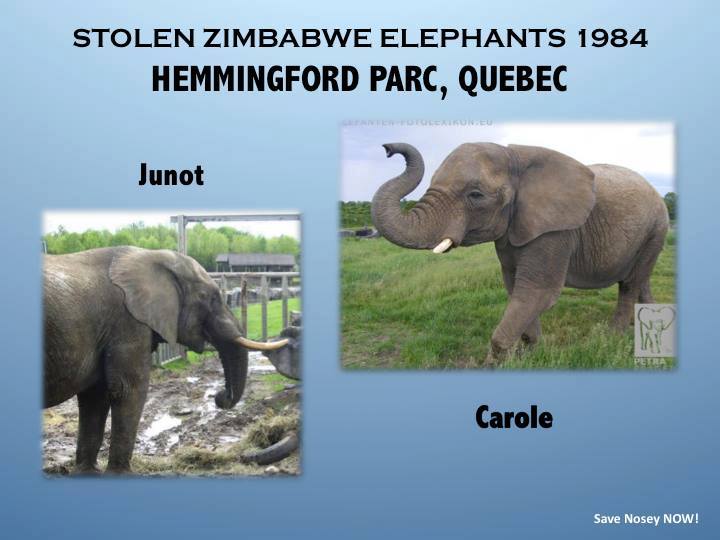 LAURA has been held at Ivory Haven Farms in Fremont, Michigan, since 1986. She has appeared at fairs, festivals, parties, and school events, where she was forced to give rides. Laura was kept with a bull elephant named Buster (also from JumboLair) for some years in an attempt to breed her, but he died in 2003, leaving her without any elephant company.

SAVANNAH (aka Nan) lived briefly at the Miami Metro Zoo in Florida, before being transferred in 1992 to the Pittsburgh Zoo in Pennsylvania. She has had 3 babies there, 1 stillborn and 2 of whom are living. The zoo has been criticized because it still uses dangerous “free contact” management. There have been deaths caused by elephants, and they were investigated in 2014 and 2015 for allowing dogs to herd the elephants. Pittsburgh Zoo lost its AZA accreditation in 2015 because they insisted on maintaining free contact with the elephants.

MUNDI has been a lone female elephant at the Mayaguez Zoo in Puerto Rico since she arrived in 1988. Like Nosey, she hasn’t seen other elephants in many years, and her habitat is small and not well kept. The zoo has been closed since Hurricane Maria in September, 2017, and there are growing calls from the public to move all the animals to sanctuary. 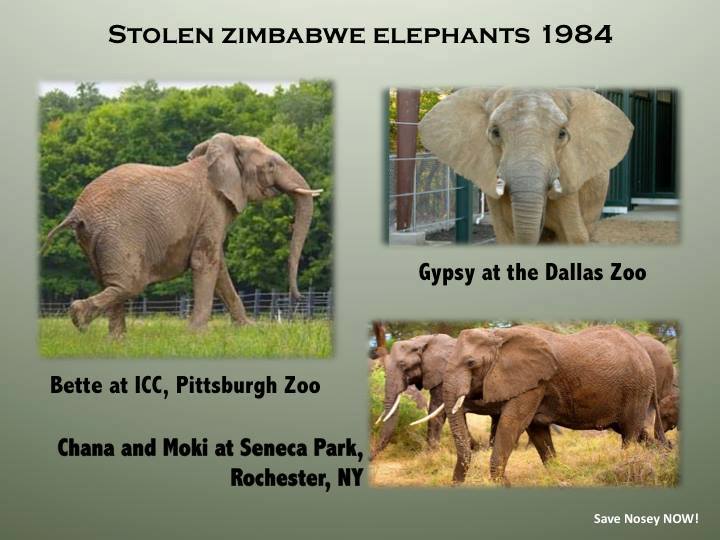 MARA’s story is a little different … and much happier than most of the others. Captured in 1982, she spent several years at Happy Hollow Zoo in San Jose, California, until her owner threatened to sell her to a circus in Mexico. A group of admirers raised $20,000 to buy and fly her to join Nosey and the other elephants at JumboLair. Within a year, however, she faced the auction block again, when Jones began selling off his herd. Her friends came to her rescue once more, and she was purchased and moved to the Performing Animal Welfare Society’s Galt Sanctuary in 1990 (now PAWS-ARK 2000 Sanctuary, San Andreas, California).

HADARI – RIP January 2, 2017 – spent her first years as an attraction at Jungle Larry’s African Safari in Cedar Point, Florida. She moved to the Nashville Zoo, Tennessee in 1995, where she was cared for by her owners and zoo staff. When the zoo decided to close its elephant exhibit, Hadari’s retirement and transfer to The Elephant Sanctuary, Hohenwald, Tennessee, was planned in collaboration with her long-time owner.

SUKARI was transferred to Reston Animal Park in Vienna, Virginia in 1985, where she spent almost 15 years as the only elephant, giving rides and painting for the public. She was transferred to the Nashville Zoo in 1999, and then “retired” with Hadari to The Elephant Sanctuary in 2015. A happy ending … and a new beginning!

Primary sources: North American Region Studbook for the African Elephant by Deborah Olson (2006 and 2011) and www.elephant.se, Locations current as of March 2016.