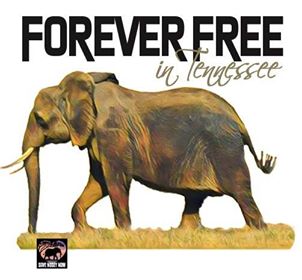 LAWRENCE COUNTY, AL (WAFF) -The owners of a traveling circus have waived their arraignment and entered not guilty pleas to animal cruelty charges in Lawrence County court. Hugo and Franciszka Liebel also filed an appeal to a recent judge’s ruling as they continue fighting to regain custody of their African elephant, named Nosey.

They’ve asked for a trial following a district judge’s order for the elephant’s seizure to remain in place. The code of Alabama allows an appeal to be taken in a civil case from the district court to the circuit court for a new trial within 14 days and with the right to trial by jury when such request is expressly made in the notice of appeal. Last month, Lawrence County District Court Judge Angela Terry issued a 17-page order that allowed the circus elephant to remain at a sanctuary in Tennessee after she was seized from her owners over concerns that the animal was abused and mistreated. Terry decided that the county animal control officer, Kimberly Carpenter, shall make decisions on the continued placement and treatment for Nosey. Nosey is being cared for at The Elephant Sanctuary (TES) in Tennessee, located southwest of Nashville. 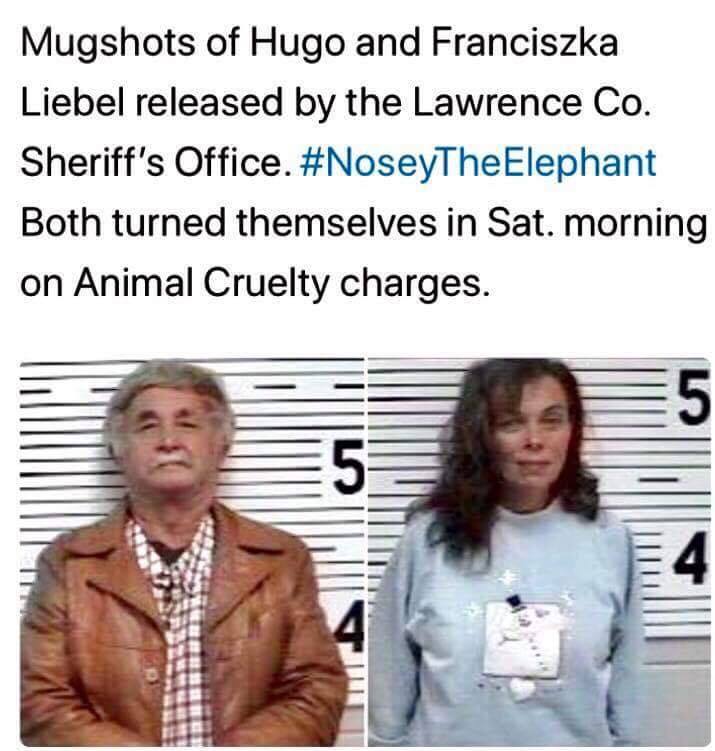 Barbara Lovett, President of Save Nosey Now, Inc. responded to the Liebel’s appeal in a statement: “Given the Liebel’s long history of documented failure to provide even the minimum level of humane care for Nosey, including failure to provide adequate food, housing, and proper veterinary care to address her serious and growing number of health issues, we believe Judge Terry ruled correctly based on the overwhelming evidence presented during the December 15th hearing. We firmly believe Nosey must remain at the Elephant Sanctuary so she can get the veterinary care she needs AND have the companionship of other elephants that has been cruelly denied her for decades.”

On November 9, 2017, during a stop in Moulton, Alabama, Nosey and the Liebels’ four ponies were seized by the Lawrence County Animal Control pending investigation of mistreatment. In a hearing later in the day, a judge extended the writ of seizure, and gave temporary custody of Nosey to the county. Save Nosey Now and PETA were both present for the hearing and assisted in obtaining and presenting expert testimony leading to the judge’s decision. Read the Writ of Seizure

Nosey was transferred to The Elephant Sanctuary in Hohenwald, Tennessee. This is a developing story: Please follow Save Nosey NOW! on Facebook for latest developments.

We are grateful to the citizens and officials of Moulton and Lawrence County and to local reporters, Aaron Cantrell, WHNT-TV, and Lindsey Connell, WAFF-TV, who covered the story so well! 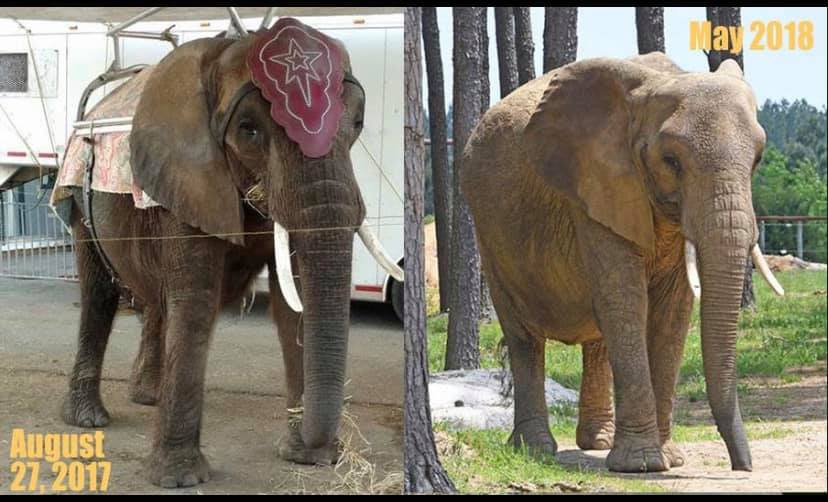 Nosey, just a name he calls me,
If he uses one at all.
For me it’s just fear
When I hear that voice call.
Stolen from a life of freedom
My mother left dead on the ground
Sent to an unknown future
No family to be found.
Thirty years in captivity
Guess it might not be so bad
If he’d just show a little compassion
And not strike me when he’s mad.
I’m a highly intelligent animal,
Probably more than he!
Gods, won’t someone help me?
Someone hear my pleas!
Thirty years of misery
At the hands of evil men
Please don’t renew that license
And give him the okay again.
My body is tired, my joints ache
Yet day after day he piles on more.
People I’m not supposed to hurt
As I struggle just to stand on all four.
You have a chance to do the right thing
And all these people do agree.
Send me to a sanctuary….
Let me spend my last years FREE! 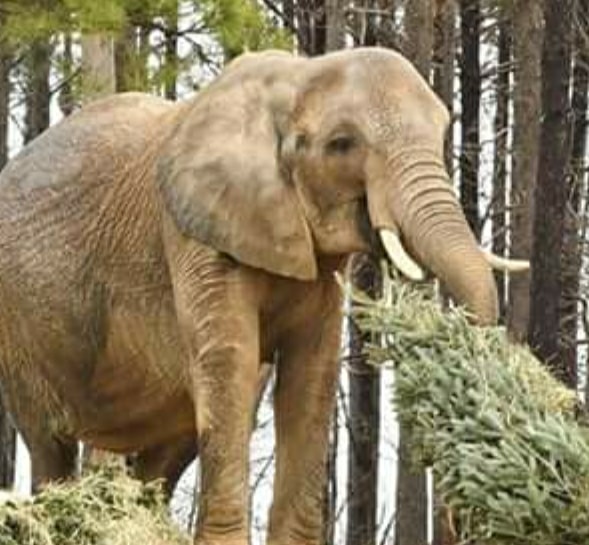 Thanks to many alert and dedicated activists, we were able to trace Nosey’s movements throughout the summer of 2017 to various venues in the Midwest. In several locations, we obtained video and photographic evidence of continued abuse and neglect, which were reported as formal complaints to the USDA. Protests were held at the Great Lakes Medieval Faire in Rock Creek, Ohio, and on September 2, 2017 at a venue in Navarre, Ohio. The Humane Society of the United States – Ohio also issued a strong statement opposing Nosey’s planned appearance in Weston, Ohio.

Nosey was then seen in Indiana, which is widely recognized as a pro-circus state. But watch this excellent reporting from rtv6 The INDY Channel — this reporter got it! And there were more protesters and positive media coverage when Nosey was at the Kewanna Fall Festival, October 1-2, 2017.

We are grateful to all who tirelessly looked for Nosey and responded to our Action Alerts. If you see ANY lone elephant giving rides or performing in your town, please let us know immediately. Every photograph and eye-witness testimony helps to build the case for their retirement to sanctuary.

*UPDATE to this report! Nosey WAS SEIZED by the Animal Control Officer of Lawrence County, Alabama on November 9th, 2017!  Nosey is now enjoying life at The Elephant Sanctuary in Tennessee!  (EST)   She has been receiving the best care for all of her medical, psychological and physical conditions suffered in the hands of the circus that abused her for over 30 years.  She is roaming vast acres whenever she wants, eating like a queen, taking mud baths, browsing on lush greenery, receiving excellent veterinary care and love from the amazing staff at the Sanctuary.  This was a miracle for Nosey.  With your help, we work every day to bring more captive elephants to sanctuary. 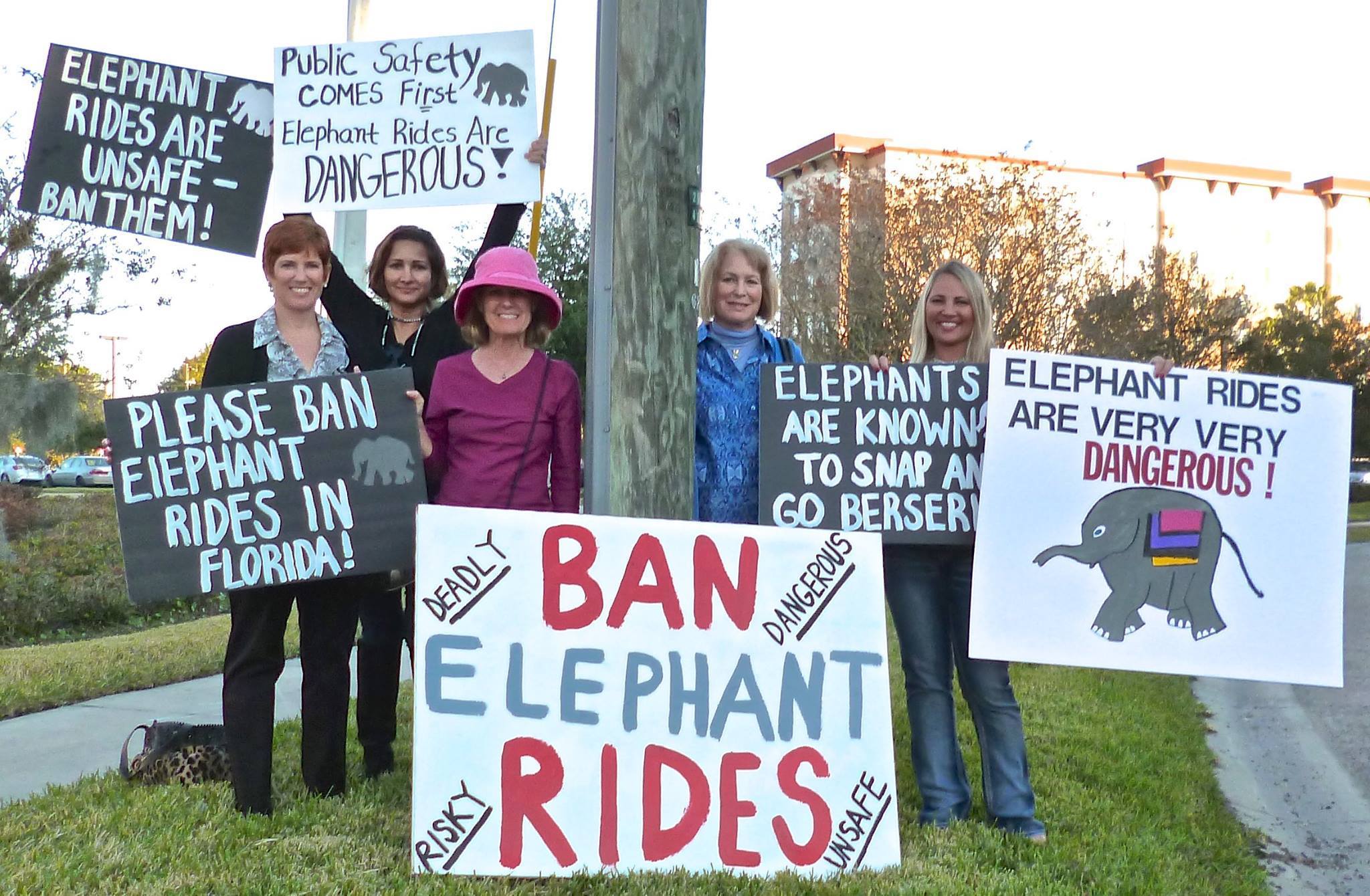 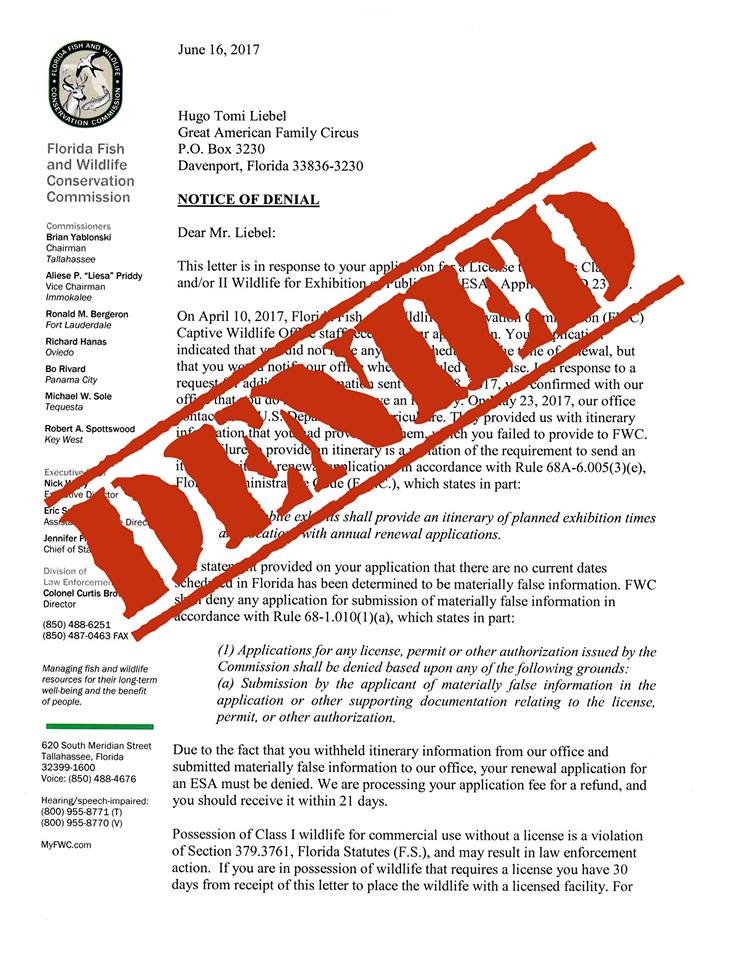 On June 16, 2017, the Florida Fish and Wildlife Conservation Commission issued a letter denying the annual renewal of Hugo Liebel’s license to possess and exhibit Nosey in the state. The denial was due to Liebel’s failure to provide the required itineraries, an issue first identified by Save Nosey NOW! and other advocates. The Liebels’ request for a formal administrative hearing was subsequently denied, but another appeal review is expected in October. It is not yet known how this will affect Nosey, but elephants are considered Class I wildlife, and cannot be kept as pets in Florida. We applaud the FWC for taking this important step in enforcing  state laws to protect animals and the public.

Nosey’s Law Bill S1093/A1923 was signed into law on 12/14/2018 by Governor Phil Murphy! The bill was amended to cover ALL wild and exotic animals. We thank primary sponsors, Senator Nilsa Cruz-Perez and former Senator Raymond Lesniak and Assembly Member Raj Mukherji, and their colleagues for this legislation that will protect not only circus animals but also the public at large. READ NOSEY’S LAW!

Illinois bill SB 1342 prohibiting elephants in traveling shows was introduced in the Illinois State Senate on February 9, 2017. It passed the Senate unanimously on April 26, and by a vote of 91-14 in the General Assembly on May 15. The bill was signed into law by Governor Bruce Rauner on August 11, 2017. Special thanks to the Humane Society of the United States – Illinois for initiating the bill, and to the many activists who protested and brought media attention when Nosey was performing in the state last year. Elephants Take Final Bow in Illinois Illinois Bans Elephants in Traveling Exhibitions

Leading the way for circus animals, both New York City and New York State passed legislation banning the use of exotic animals for entertainment. The “Elephant Protection Act” passed both houses on June 7, 2017, and was signed by Governor Andrew Cuomo on October 19, 2017. The New York City ban passed by a Council vote of 43-6 on June 21, and was signed by Mayor Bill de Blasio July 28, 2017!

Will your state be next? Join Save Nosey NOW! and learn how you can help.

SUPPORT THE US BAN! TEAPSPA NEEDS YOUR VOICE!

“Nosey: A Story of Abuse and Neglect” details Nosey’s life in words and photos from the point of view of a young girl writing to President Barack Obama. Published in 2015 as a joint project of Action For Nosey Now, the California Environmental Institute, and Save Nosey NOW!, Nosey’s storybook was sent to the White House, members of Congress, and other public figures in hopes they would take action! 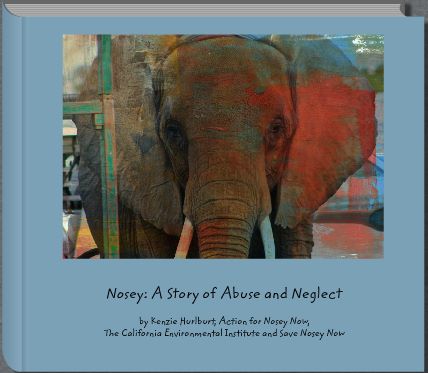 [su_quote cite=”Heather Leughmyer”]The majestic grace
Of your silhouette
An enormous frame
They wont soon forget
But from shadowed stands
They don’t see your eyes
How they reveal
A thousand lies.
They would see your freedom
Ripped away
They would see the price
You had to pay
The day you wept
As your mother lay dying
And they didn’t care
That her baby was crying.

You should be strong
You should be proud
Now you cringe before
A roaring crowd
Callously “broken”
So long ago
And forced to perform
This awkward show.

Caught up in the moment
As you “entertain”
They don’t notice the bull hooks
The scars, the pain
From their seats they don’t see
What your eyes say so well
If they saw they’d be sure
Yes, there’s a hell.
[/su_quote]