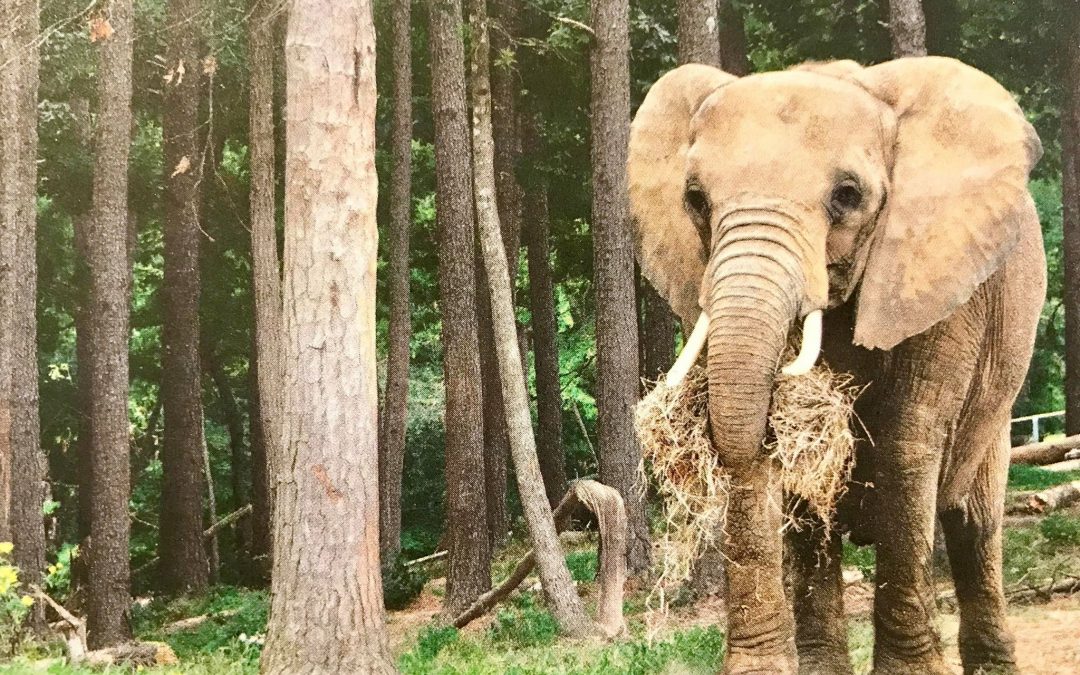 Today, Lawrence County, Alabama Circuit Court Judge, Mark Craig, dismissed the appeal for custody by Nosey the elephant’s former owner, Hugo Tomi Liebel, and decreed that she will remain permanently free at The Elephant Sanctuary in Tennessee.  Nosey, the long suffering 37 year old African former circus elephant, was originally confiscated from a traveling circus on November 9, 2017 by Lawrence County Animal Control Officer (ACO) Kimberly Carpenter after finding Nosey in a parking lot tightly chained, exhibiting stress, without sufficient food or access to water, forced to stand in her waste, being transported in a cargo trailer and without proper shelter.  Hugo Liebel and his wife Franciska were both also charged with animal cruelty. Carpenter was awarded temporary custody of Nosey after a hearing on November 9th, and Nosey was immediately placed at The Elephant Sanctuary in Tennessee to be housed and receive much needed medical care.  After a hearing the In December, 2018, District Court Judge, Angela Terry, awarded permanent custody to Lawrence County on January 22, 2018.  The Liebel’s filed an appeal to that decision in February, 2018.

UPDATE: In December, 2021, the Lawrence County District Court of Alabama turned over permanent custody rights to The Elephant Sanctuary in Tennessee.

Save Nosey Now and its members across the country have been advocating, documenting violations, filing complaints and tracking Nosey since 2014.

“We are thrilled that Nosey the elephant is now permanently free to enjoy the rest of her life at The Elephant Sanctuary in Tennessee,” said Barbara Lovett, the President of Save Nosey Now. “After over 3 decades of abuse and exploitation by her circus owners, she can finally fully enjoy one of the biggest benefits of sanctuary, the companionship of other elephants that she has been denied for decades.”

Nosey became the nationally known “poster child” for the hard life of captive circus elephants, with a long history of mistreatment.  Her former owners racked up over 200 Animal Welfare Act (AWA) violations, documented by the United States Department of Agriculture Animal and Plant Inspection Service (USDA APHIS), including many repeated violations for chaining her so tightly she couldn’t take a step in any direction, failure to provide her adequate veterinary care, failure to provide her adequate food and water, and the failure to provide her a suitable and sanitary primary enclosure.  In January 2018, Save Nosey Now submitted a 400-page document to the USDA again calling for the termination of the Liebel’s AWA license detailing 3 decades of that documented abuse of Nosey by Hugo Liebel.  In April of 2018, the USDA announced it was beginning termination proceedings for Liebel’s AWA license, and on October 9, 2019, a USDA administrative law judge ordered that Liebel’s license be terminated, finding that Hugo Liebel was unfit for licensure and that continuing to allow Hugo Liebel to maintain a license would be contrary to the purpose of the Animal Welfare Act’s purpose of maintaining humane treatment for animals.

The termination of Hugo Liebel’s AWA license and Nosey’s permanent placement at The Elephant Sanctuary in Tennessee is the culmination of over a decade of activism by advocates and groups like Save Nosey Now.

“Nosey is finally and forever free in Tennessee,” said Ms. Lovett. “Nosey was failed again and again by the agencies charged with protecting her, until the good people of Alabama saw her suffering and took immediate action to stop it.  Since arriving at the sanctuary, Nosey’s condition has already improved tremendously, and we can’t wait to see her making friends with the other African elephants after decades of being alone.”