From Captivity to Sanctuary!

According to the North American Regional Studbook for the African Elephant, Nosey was born sometime in 1982 in the African nation of Zimbabwe. It is likely that her home was Hwange National Park, the country’s largest wildlife preserve.

Around 1984, Nosey was wild-caught and transferred on a 22-hour, high-altitude Boeing 707 flight to the United States by eccentric millionaire, Arthur Jones of JumboLair in Ocala, Florida. The capture was reportedly a rescue effort to save 63 baby elephants from a government issued culling and was featured on an episode of ABCs 20/20 called, The Flying Elephants. Jones’ plan to create a “true American herd” was abandoned within a few years. Nosey was one of around 40 elephants sold to circuses or zoos, while 10 elephants died between 1984 and 1987 from transport stress, wounds, and disease.

In 1986, Nosey left JumboLair and was transferred to David Meeks of the Meeks Company in South Carolina, now known as Hollywild Animal Park. When Arthur Jones decided to disperse his JumboLair herd, he contracted with Meeks to find the elephants new homes.

Meeks advertised their sale in The Circus Report: “Available for Sale Baby African Elephants Ranging from 3 to 5 years old. All our BABIES are broke to leg chain and lead. Any SPECIAL TRAINING is available on request … GET YOUR ELEPHANTS NOW … while they are AVAILABLE, AFFORDABLE and SMALL. Our babies ARE all SOUND, HEALTHY and acclimated to U.S. climate and diet” (ad printed Jan 27, 1986).

Where are the other JumboLair elephants now? 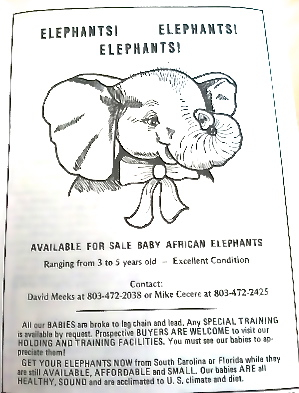 In 1988, Nosey was purchased by Hugo Tomi Liebel (aka Tommy Liebel, Hugh Blum, or Hugo Bloom) of the Liebel Family Circus (aka Florida State Family Circus, Great American Family Circus, Liebling Bros. Circus, or Liebling Bros. Family Circus) of Davenport, Florida. She has been held captive, alone, ever since. She gave rides and performed in fairs, flea markets, festivals, and private events, and wasn’t allowed the company of another African elephant. (Though the Liebels have had no other elephants since Nosey’s purchase, they were documented to have had at least one and possibly two previous elephant deaths.) She was exhibited under the stage names Tiny, Peanut, and Dumbo, and was often contracted out to work in other circuses, such as the Hamid or Garden Brothers. Her “normal” route took her from Florida in the winter, up the Eastern seaboard as far north as New York, and back through the mid-west and Texas.

What’s so bad about elephant rides? 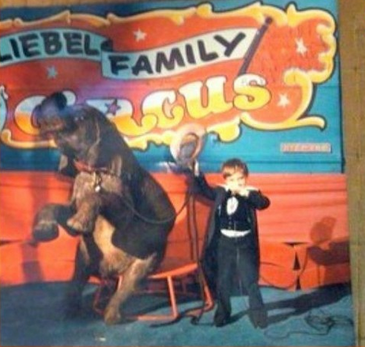 Nosey, like the Liebel’s previous elephant, was trained to perform unnatural tricks from an early age.

Hugo Liebel was cited for violating the Animal Welfare Act numerous times over the decades on multiple accounts, including but not limited to:

In 2011, the United States Department of Agriculture brought 33 formal charges against Nosey’s owner, which could have resulted in her confiscation. Instead, in a settlement agreement reached in 2013, Liebel was assessed a civil penalty of $7,500 and ordered to stop violating the AWA. Despite this agreement, Liebel has been cited at least four additional times for failing to protect Nosey or other animals in his care as well as the public with whom they come in contact.

After working in the circus for three decades, Nosey was spotted in November, 2017, standing in her own waste, chained, beside the road in Lawrence County, Alabama. Some quick-witted  advocates contacted Administrators of Save Nosey Now to ask for guidance. Subsequently, Nosey was seized by an Animal Control Officer in that County. She was immediately transferred to The Elephant Sanctuary in Tennessee where she was medically and psychologically evaluated and where she can be an independent elephant. A bench trial for her custody was held where a very conscientious Assistant District Attorney took on her abusive owners. Evidence of the cruelty she had endured her whole life was presented. After several weeks of careful deliberation, the Judge ordered Nosey to the custody of the Animal Control Officer who made the decision to keep Nosey at the Sanctuary. Nosey’s former abusers were charged with animal cruelty, but they did appeal the Judge’s order. In December, 2020, The Elephant Sanctuary in Tennessee was awarded permanent custody of Nosey by the court in Alabama. Nosey has EARNED her retirement in a true elephant sanctuary, where she is now living in peace. No more rides, no more performances, no more bull hooks!

Where could other captive elephants find a “forever home?”